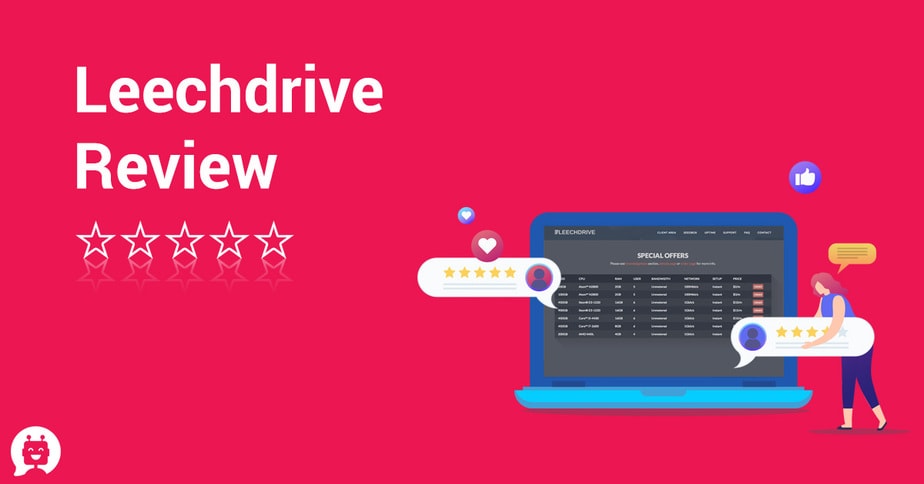 Leechdrive was open in the year of 2014 when they launch their first seedbox online. Now it has been 6 years that they are giving premium types of seedbox at affordable prices so that their seedbox can be affected by anyone.

Before going into the detailed review about LeechDrive First, let’s understand what is Seedbox and what you can do with it?

A seedbox is a dedicated server with a public IP address for accessing and seeding BitTorrent files at a high-speed data center. Individuals who have connections to a seedbox will import these files at any time and from any location with an internet connection to their personal computers.

A seedbox is a term for when torrent community users use a dedicated server or VPS to increase tracker upload. Normally a seedbox has a very fast connection (anywhere from 10Mb / s to 1000Mb / s) and is accessed by the user remotely. They can be leased month by month, or quarterly. The rapid pace helps users to quite quickly attain large ratios on torrents, thereby increasing their upload to the server.

Leechdrive servers are located in Roubaix, Gravelines & Paris and  France so that they can be easily accessed by users and no latency is observed when they are using seedbox. They have also stated how much RAM on a particular plan and how many users are there on it.

Allow you to do heavy tasks

As in Leechdrive, they provide plans with a description of how much RAM is allotted to each one of them. So that when you choose any of them you can get an idea of how much RAM you would be using to choose a particular plan. As for doing heavy tasks on Leechdrive it has become difficult tasks to that as not so much RAM resources are given to a particular plan and there is not such great speed of performance through it can handle heavy tasks in its seedbox.

Allow You to use peer to peer network

Peer to Peer network means that two PC is connected over the internet and without having any extra server they can share files and folders easily. Leechdrive provides a better way to connect the P2P network so that the speed through which your transfer of files is going on is fast enough, also they make sure that the connection that has been made is secure and encrypted so that no malicious actions can be done.

Privacy and Anonymity is one of the major things that is being watched during operating a seedbox. Leechdrive somewhat fulfills that requirement as they enhance your online anonymity with encrypted access & secure protocols so that they make sure your data only by applying encrypted FTP and TLS for transferring your data from your PC to seedbox or vice a versa. It will be set in secure mode so that no 3rd person can check your data and alter them.

Not too much space available

As you know that nowadays seedbox comes with a variety of space so that you don’t have to store anything on your local computer and can get enough storage area online so that you can save anything online. But there is a drawback of Leechdrive because it doesn’t allow too much space to your seedbox. Their highest space that is available in there highest prices plan is 200GB which is very low compared to other seedbox providers. Which is one of the major disadvantages of Leechdrive seedbox?

Now let’s talk about some performance ad support system that is provided by Leechdrive to their customers once they have paid.

First of all, after you have paid for your seedbox it takes a huge amount of time to set up their seedbox and to start using. Sometime seedbox is also stuck at their pending state in which the user has paid and still for several days seedbox will not be setups and ready to use.

Their performance is great as they provide RAM detection which frequently tells you how much capacity is being used by your seedbox and how it is being reacted to it. Which is a point in there favor as users can understand easily what is being wrong what is not? They also provide maximum speed through their server for downloading and as well as uploading but sometimes the servers doesn’t react too much which creates some glitch in the seedbox.

Their support system is not that good as there is no active chat system or any online chat support system. You can only contact them through tickets and through emails which is not a very good communication way for users. Also, sometimes they are too late to solve tickets or any technical issues that have been raised by users.

Leechdrive has 8 plans that you can find a difference in. There are many things that they show in a list that describe how there each plan differs from each other.

Their most basic plan is 4$ per month which is the most reasonable for a basic plan which comes with 2GB of RAM with 10 users capacity and with the lowest speed that you can get. This makes it difficult for users to choose as other providers offer better in their basic plans with many more features in it. The basic plan is too basic as it doesn’t offer either great speed or great storage area for the users.

There high rated plans come around 10$ per month which offers  10GBPS of speed to there customers. There are all allocated at 32GB of  RAM and traffic capacity which is placed at 1GBPS which is better than their basic plan. All come with preinstalled apps and plex which is also a point in their favor. The two things that are bad is that they don’t offer too much storage area or speed to their customers compared to other seedbox providers.

Also, there is no support system that can help users to get perfect knowledge neither there FAQ question is that effective. Overall Leechdrive offers plans which are cheap but are not allowing good features in their seedbox so that users are attracted to their seedbox.

you can visit there site here, If you are looking for more options you can refer to our top list Seedbox.